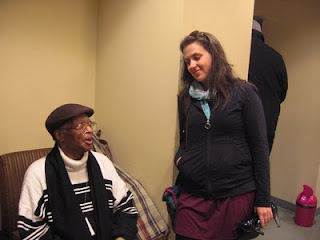 I got to hang with Curtis Fuller during Betty Carter Jazz Ahead last month. I just found this picture, and it reminds me of how amazing he truly is. A huge inspiration and an incredible person. This is backstage before the last concert. Thanks for the photos Stephanie! 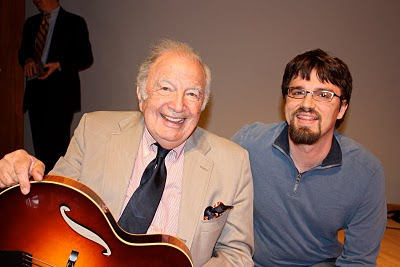 What is my personal sign of spring? Jazz Appreciation Month. That’s right. Appreciate me. There are so many great events going on this month it’s overwhelming. Check out some examples on my new favorite blog http://dcjazzshows.blogspot.com/.
My dear Diev and I were out today at legendary Bucky Pizzarelli’s masterclass and were thrilled to get to meet him in person after the show. What an amazing guitarist, and a cheerful guy to be around. I think he smiled through the whole set with bassist Tommy Cecil.

As for my own contributions to appreciating jazz this month, I will be performing tonight with the Howard University Jazz Ensemble at Westminster Church in SW DC. We will also be performing Sunday at the Anacostia Community Museum.

I am thrilled that my composition and arrangement “Lightning” will be performed by HU’s (Downbeat Award-Winning!) Afro-Blue, together with the Smithsonian Jazz Masterworks Orchestra on April 24th at 5pm in the Sylvan Theatre on the National Mall for the closing weekend of JAM activities. Many thanks to fabulous arranger and donut-bringer Scott Silbert for his tips on the arrangement!

Please, if you can, appreciate some real live jazz this month. 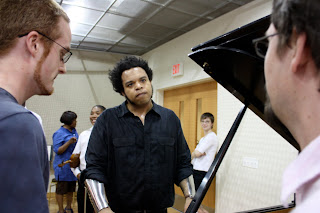