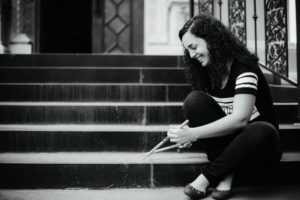 Ana Barreiro is a jazz drummer based in Los Angeles who carries her Brazilian roots to various musical situations.

Originally from the Southeast of Brazil, she was awarded a Latin America Scholarship from Berklee College of Music and made the move to Boston in 2009. She then relocated to Los Angeles in 2013 to pursue a Masters Degree in Jazz Studies at the University of Southern California where she studied with Peter Erskine and worked as his Teacher Assistant. As an active drummer in the Los Angeles Jazz scene she has had the opportunity to perform with Larry Koonse, Catina DeLuna, Bob Sheppard, Darek Oles, Edwin Livingston, Scott Healy, Kirsten Edkins, Isaac Smith, Bruce Forman, Amy K Bormet and is currently the drummer for Grammy Nominated pianist Otmaro Ruiz. Ana is on the Faculty of the Stanford Jazz Workshop and the Musician’s Institute in Hollywood and uses Vic Firth Sticks.